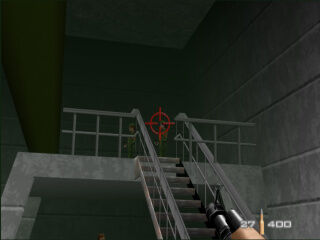 Aim mode is activated by either holding or pressing the aim button, depending on which setting is selected. When in aim mode, a red sight is displayed on the screen if it is enabled. If the weapon has a zoom value, the view will also zoom in. Regardless of the control style in use, the analog control stick always controls Bond's aim. Once in aim mode, Bond can track his targets much easier than aiming using the game's normal controls, since the view usually does not need to be moved while following a guard on a patrol route. This is especially true if the sight is enabled. Aim mode is less effective against quickly moving targets, such as those who have spotted Bond, or are running to a destination. The player's target is not fixed in aim mode, even when centered on the screen, and will wobble slightly.

When aim mode is in use, the player's movement is restricted. They may only change their view by moving to the extreme left, right, top, or bottom of the screen. Turning in aim mode is much slower than normal, as well. Moving forward and backward and strafing is no longer possible, however, the player can "lean" left and right. This is accomplished by holding left or right on the control pad or the corresponding C button. Bond will quickly move a short distance to the left or right. When the buttons are released, he will return to the original position.

Pressing down on the control pad or C down when in aim mode will allow the player to crouch, and up will return them to a standing position when already crouched. If the aim button is released (or pressed a second time) while crouched, the player will remain crouched. Movement while crouched is about half as slow as normal. Crouching also steadies the player's view, making using weapons with a long zoom range easier to control.

The Sniper Rifle and Camera can have its zoom range adjusted while in aim mode. Pressing up on the control pad or the C up button will zoom in; pressing down will zoom out. As a result, the crouch function is disabled while using the sniper rifle, but the player can remain crouched when switching to the weapon. Remaining crouched is a good idea, since the sniper rifle is very difficult to control when aiming at long distances.

If aim mode is activated while riding in the tank, and the tank was moving, it will continue moving at the same speed it until aim mode is deactivated.

Aim mode is a relic of the game's original concept: a rail shooter. Unlike most first-person shooters, the player's aim is not fixed to the center of the screen in rail shooters. Instead, it can be moved to any location on the screen, but the player's view is always fixed. Hitting the aim button essentially switching the game into a psuedo-rail shooter mode; the player has limited control over their movement, but more precise control over their aim. The rail shooter that inspired the aim mode was Sega AM2's Virtua Cop.

Ken Lobb came up with the idea of using the control pad or C buttons to peak around corners while in aim mode.

The mode can be regarded as the ancestor of the Aim Down Sight (ADS) mode popularised by Call of Duty; the latter is essentially just an in-universe reason to switch to a slower precision aiming mode from a faster "look" mode. ADS aiming is used in both of the recent GoldenEye games, as well as most other modern shooters.

Retrieved from "https://goldeneye.fandom.com/wiki/Aim_Mode?oldid=13999"
Community content is available under CC-BY-SA unless otherwise noted.