GoldenEye offers one of the best multiplayer experiences on the Nintendo 64. Outlined here are a slew of multiplayer stages native or otherwise, common strategies and complaints, and any other stuff that otherwise belongs here.

There are 9 options in the Multiplayer screen. Player 1 chooses the make-up of the game.

Players: Select the number of players to play a match. It can range from 2-4 players.

Scenario: Select which scenario will be played. Each scenario has its own specific rules and restrictions.

Level: Select which stage the match will take place. Some stages cannot be selected until attainable in single player; others are restricted due to number of players. 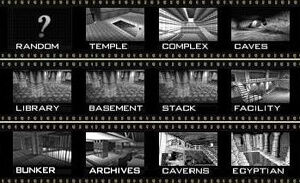 Weapons: Select one of 14 weapon sets to appear during the match. Some scenarios automatically choose a weapon set.

Characters: Select which character you will use. Initially 8 characters, the number will increase to 33 upon completion of the Antenna Cradle stage. A total of 64 characters will be available by entering a button code or with a cheat device.

Health: Select the health your character will have during the match. A total of 11 are available. The License to Kill scenario eliminates this option altogether.

Control Style: Select which control style you will use. A total of 4 are available for 3-4 players. Depending on whether one has 4 controllers, a total of 8 are available to 2 players.

Certain cheats in the cheat menu are available for use in Multiplayer.

Invincible: The players become invincible and are not able to be killed. With all characters being unkillable, only the Flag Tag scenario can be used somewhat effectively. However, the person who finds the Flag first wins.

Infinite Ammo: Ammunition becomes unnecessary as you only need to pick up the weapon and it will be fully loaded. You still have to reload after evey clip is exhausted, but you will never need to collect ammunition. This cheat negates the five throwing weapons as they are only found in ammo boxes: Throwing Knives, Hand Grenades, Timed Mines, Proximity Mines, and Remote Mines.

DK Mode: Characters' proportions are exaggerated. The head becomes massive, the arms enlarge, and the body and legs become small.

Paintball Mode: Shots that hit the wall appear as brightly colored paint instead of bullet holes. Explosions do not produce paint.

No Radar (Multi): Created exclusively for Multiplayer, this removes the default radar on the top right of the screen.

Music: Adjust the volume of the music playing. The default is the loudest setting

FX: Adjust the volume of the sound effects. All sounds are affected simultaneously. The default is the loudest setting.

Ammo On-Screen: This controls whether the ammunition counter will appear on the lower right hand corner of the screen when using a weapon that uses ammunition. You can turn it ON or OFF. ON is the default setting. This can make it difficult to see whether you are using the thrown explosive weapons (Hand Grenades, Timed Mines, Proximity Mines, Remote Mines) because the only way to see whether you have them on hand is to read the ammunition count.

Ratio: Determines the screen ratio. Choose between NORMAL or 16:9. NORMAL is the default setting.

Multiplayer features several differences from single player stages. Objects reappear after being destroyed or collected. Players can select their characters, their handicap, aim settings, and so forth. All multiplayer stages contain the following four elements.

A list of the eight different possible weapons that can be placed in the stage. Stages list which of these appear and their location in the level.

Issued at the end of each match. Based on what each player did during the match and how they did in the match.

Increases the damage a player can receive.

Used in the multiplayer scenario The Living Daylights. Only one flag may be placed in a stage.

Player start positions. Each stage can have up to sixteen unique locations. At least four are needed for most stages to work correctly.

There are several special scoring modes that can be selected in multiplayer. In addition to the standard selection, several user-created scenarios can be used with a cheat device.

Everyone needs someplace to play. This is a repository for the 13 original and the many new multiplayer stages that since have been added.

Some call them tactics, others call them cheap. This is a home for all those sneaky little tricks that have been developed over the years. Multiplayer settings and combat techniques are covered in-depth.

Retrieved from "https://goldeneye.fandom.com/wiki/Multiplayer_Overview?oldid=12769"
Community content is available under CC-BY-SA unless otherwise noted.