The Soviet Missile Silo is set in Kirghizstan, and is the sixth level of the game. The guards here are Russian Infantry, and they use the KF7. The surroundings of the Silo are bland, having gray walls in the hallways and dirt walls in some of the fuel rooms. Here, Bond has to infiltrate the silo and stop the unscheduled test firings from going ahead. The only way to do this is to plant the C4 Plastiques in all the fuel rooms. After all the objectives are completed, you'll come to a hallway where General Ourumov is awaiting your arrival. If you shoot Ourumov enough to make him retreat, he'll drop a Briefcase and a Keycard. These items do not affect the outcome of any objectives or actions in the mission. After you have completed all the objectives, get to the elevator and the fuel room will promptly blow up. 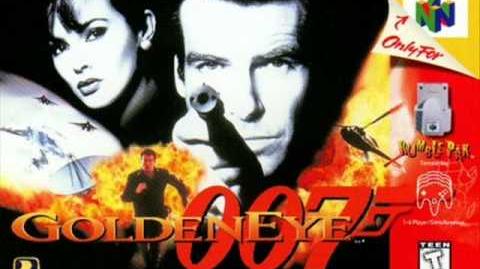 Silenced PP7 - Given By Default

Plastique - Plastique C4 to place in the fuel rooms.

DAT Tape - dropped by one of the scientist.

Scientist (If provoked on difficulties higher than Agent.)

Community content is available under CC-BY-SA unless otherwise noted.
Advertisement