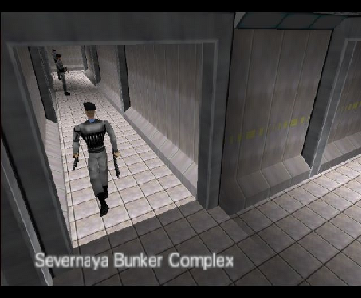 Bunker 3 is a mission created using a the Bunker 2 template via the GoldenEye Setup Editor by Scorpion.

The mission takes place after Cradle. Janus is back and under a new leader codenamed Wreck. Natalya is kidnapped at her home and taken prisoner at a new Bunker site. Bond goes and rescues her, gathers evidence to shut Janus down and saves the day.

The mission was made possible with the help of other legendary hackers: SubDrag, Wreck, Dragonsbrethren.

Being Scorpion's first mission, the detail and atmosphere isn't that much. But a re-release is in the works, that in his own words: It's going to open a new world of hacking.

A previous mission was in the works. An alternate mission to Frigate, but was shot down due to technical issues.